About an hour’s drive north of Cabo San Lucas, and the same distance south of La Paz, lies a gem of a town. It is the town of Todos Santos, hailed as a “Pueblo Magico,” a magical town, by the Secretary of Tourism of Mexico in 2006. In an effort to emphasize that Mexico is more than just sun, beach and beer, visitors are encouraged to seek out these magical towns. The Department of Tourism has designated 30 towns, throughout Mexico, as “Pueblos Magicos,” based on their outstanding history, art, architecture, cuisine, and ancient charm. 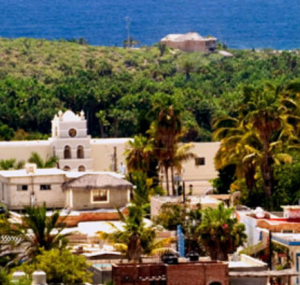 Since its conception in 2001, the project’s goal for the designated towns has been to invest in the infrastructure, generate resources for community development, and promote each location as a tourist destination. It involves improving the town’s overall image, while maintaining and emphasizing its customs and traditions. Instead of modern options, the townspeople are encouraged to use local or traditional building materials. This is evident in Todos Santos, where old brick buildings are being restored and new structures are being built with aged brick.

Founded in 1723, Todos Santos (All Saints) was colonized by Jesuit missionaries, as was much of Southern Baja. The continuous water supply from the 7,000-foot Sierra de la Laguna mountain range allowed crops to be introduced. The town flourished until the end of the century, when the mission was abandoned and the town almost faded away. Shades of the fabled “Brigadoon,” it reawakened as a sugar cane capital during the mid-nineteenth century. It again thrived, with more than half-dozen sugar mills for the next 50 years. During this period, Todos Santos developed a vibrant culture. Alas, falling sugar prices after World War II, and the mysterious disappearance of the fresh water supply, left the town almost abandoned for the next 30 years. It virtually became a ghost town. Then, an odd phenomenon occurred in 1981; the water supply strangely returned. Since then, the town’s population has progressively increased. The town has become an agricultural center, producing mostly organic fruits and vegetables. In addition, Todos Santos has developed into a cultural and artistic center, a tourist attraction, and a haven for retirees.

Architecture: the Old and the New

Upon entering the town, one might wonder what the draw is, and above all, what makes it “magical.” You will quickly discover the magic when you step beyond the tourist trinket shops to encounter the classic provincial Spanish-style architecture. You know you’ve entered a special place, when you wander purposelessly up and down the gently sloping streets, some paved, some dirt, some cobble-stoned, eyeing imposing Andalusian-inspired adobe brick buildings with Gothic windows, evidence of the once thriving community of a century ago. Facing the town plaza is the Catholic Church, Iglesia de Nuestra Señora del Pilar de Todos Santos, where you can step into the vestibule and view examples of early California religious art, dating back to 1747. The solitude of the simple sanctuary offers a moment of inner peace, while church bells ring out periodically, making a nice interruption.

Like the whales that make their 7,000-mile trek south, so came the artists, writers, and other creative types who heard about this laid-back oasis. Unlike the whales that return north, many artists stayed, making Todos Santos their home and putting the town on the map as a bohemian art colony. Several prominent artists opened galleries, some from as far away as New York City and Santa Fe, New Mexico.

From Tacos to Haute Cuisine

In order to increase tourism in Todos Santos, many trendy restaurants have been established, along with lodging, cultural events, and celebrations. The much publicized, upscale Cafe Santa Fe is just one of many restaurants encouraging tourists to come for a visit. Cafe Santa Fe is housed in an 1850s hacienda-style building and offers Italian seafood cuisine. A local hangout with great baked goods, huge sandwiches, tasty salads and the best cappuccino in town, is Caffe Todos Santos. Another restaurant to check out is Los Adobes, a restaurant specializing in tantalizing Mexican fare. You will also find the traditional taquerias, which attract both locals and tourists with their fresh seafood tacos and cold beer. Other worthy eateries include Il Giardino Trattoria, Ristorante Tre Galline, and La Fonda El Zaguan.

Many day-trippers travel the hour to Todos Santos just to have lunch. However, those curious about the air of mystery surrounding the area will want to spend more than a day in this magical town.

The legendary Hotel California reopened four years ago after a major renovation by the late owner, John Stewart. The hotel explodes with bold colors, art, and metal and glass sculptures. It is an adventure just walking through the colorful lobby, the eclectic bar, patio restaurant, and into the adjacent bazaar, where you will find a myriad of treasures from throughout Mexico and other distant lands. The hotel restaurant, La Coronela, features local seafood under the direction of Chef Dany Lamote, a transplant from Brussels, Belgium.

The world-class estate of Casa Bentley, Baja’s Boutique Hotel, is a captivating and luxurious hideaway tucked away just steps from the historic center of town on more than two acres of an original avocado-mango orchard. Owner Bob Bentley built and designed this “castle” rather than a “casa” taking inspiration from a Portuguese castle visited during his travels. He also incorporated a rock and gem collection along with countless interesting objects acquired around the world that you’ll discover throughout Casa Bentley.

The romantic Todos Santos Inn is the perfect place to unwind for a night, or two or three. This charming bed and breakfast boutique hotel was built in the mid-19th century as the home of a sugar baron. Their newly revamped wine bar, La Copa, will tempt you with fine wines and gourmet appetizers.

After sundown, the town closes up, literally. Where doors had opened to hidden courtyards and shops with their wares hanging outside, there is no longer any reason to roam about. In Todos Santos, you would be hard pressed to see another soul on the streets after dark. Locals are home with their families and day-trippers have returned to the rowdier towns of Southern Baja. Visitors are often safely tucked away in their quaint quarters or quietly sipping a last margarita from a sexy red glass in the candlelit bar at Hotel California. The following day, the town comes alive again around noon, when all the day-trippers arrive once again.

One thing is undeniable; the heartbeat of Todos Santos is its “feel,” its aura, its atmosphere. There’s a certain mystique that, when allowed entry, opens up a feeling of serenity and peace within, reminiscent of a page out of a long-ago story about Mexico. Todos Santos retains a genuine Mexican flavor not found in nearby Cabo San Lucas, La Paz, or even San Jose del Cabo.

Is there something magical about Todos Santos? If you allow it, you may find yourself mesmerized, even captivated, and already planning your next visit.