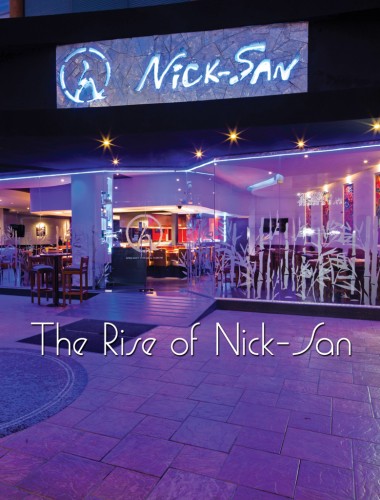 A surprising story of friendship, honor, and passion for Japanese cuisine
By Michelle Alighieri

Twenty-five years ago, Angel Carbajal met a man who would become one of the most important people in his life. Japanese chef Masayuki Niikura was visiting Los Cabos for the first time, and he and Carbajal met by chance. In the years since, he has become a friend and mentor.

At the time of their chance meeting, Carbajal was managing Señor Sushi, then one of Cabo San Lucas’s few restaurants and the first in Los Cabos to have sushi on its menu. It was Carbajal who introduced the traditional Japanese cuisine to Los Cabos. Sushi was a novelty in the area, and sushi chefs were few and far between. When Señor Sushi’s chef—a man with basic sushi knowledge—unexpectedly left one night, Carbajal found himself taking the reins in the kitchen. He’d never made sushi before and was immediately aware that he had much to learn.

Niikura—known as Nick among his friends and colleagues—happened to be in Cabo San Lucas and heard there was a sushi restaurant in the area. He looked it up, and there he met Carbajal. Niikura asked whether he, his wife, and their friends could have dinner, and Carbajal was quick to agree. But Niikura had one more request: He wanted to be the one to prepare the meal. Carbajal was taken aback by the request. His customer wanted to pay for his meal—and prepare it. Nevertheless, he agreed, granting Niikura complete access to the kitchen.

That evening, Niikura returned before the other guests to make his own mise en place, preparing his own rice, cutting and cleaning the fish, and getting everything set for dinner.

Carbajal was wonderfully surprised by Niikura’s creations. Among these dishes was the spicy tuna roll, which Niikura created and which now appears on sushi menus the world over. The few sushi plates on Señor Sushi’s menu were very basic, and Niikura’s personality and preparations intrigued Carbajal. Fellow customers were equally mesmerized as they watched this Japanese chef in the kitchen. They began asking him to make their meals as well, and Niikura—without pointing out he was also there as a customer—happily obliged.

It was a magical moment. Days later, Niikura returned to thank Carbajal and to offer to serve as a mentor. He invited Carbajal to his Los Angeles restaurant, which is still there today, and to learn from him all he knew about Japanese cuisine.

Carbajal waited a couple of years before heading to Los Angeles; he didn’t want to abandon his responsibilities as Señor Sushi’s manager. But he has counted Niikura as a friend and mentor since the day he arrived in Los Angeles. When Carbajal returned to Cabo San Lucas, he opened La Terraza restaurant in the heart of Plaza Bonita. The menu included pizza, grilled items, and sushi. But, over time, it began to focus more heavily on sushi and teppanyaki. This is when Carbajal and his brothers started what would become the first real Japanese restaurant in Cabo.

Years later, Niikura returned to Cabo San Lucas and proposed he and Carbajal partner to open a Japanese restaurant. Carbajal left La Terraza, and he and Niikura opened Nick-San in October of 1994.

The Carbajal family has been involved since Day One. Siblings Jorge, Edgar, Santiago, Jaime, and Carmen held various positions, ensuring the restaurant had a warm ambience and provided quality service. New generations have slowly been integrated into the group, including more siblings: Rosy and Gerardo. Along with the Carbajals, there has been Niikura and his wife, Kazue, who have become part of the extended family and are a very important part of the project.

And throughout the years, the name Nick-San has been synonymous with quality, innovation, and love of Japanese cuisine.

The Nick-San restaurant and brand fused the talent of two chefs born a world apart. Despite their very different backgrounds, they came together because of a shared passion for food.

In the two decades since the first Nick-San restaurant opened in downtown Cabo San Lucas, the concept has evolved from what was simply a fusion of traditional Japanese cuisine with some Mexican ingredients to complement its flavor to a completely new gastronomic experience. The techniques have grown even more sophisticated, and in every plate you can see the passion of Nick-San’s chefs.

This passion and innovation have allowed Nick-San to grow exponentially. There are now six franchisees in México. Each strives to exceed clients’ expectations. There is a wide variety of fresh fish to be enjoyed in sashimis or nigiris, as well as in Nick-San’s special creations, some of which are invented on the spot.

Nick-San is also known for its outstanding selection of sakes, Japanese beers, and house wine (there’s a Mexican sauvignon blanc as well as a special edition of the French merlot La Grange Clinet). All of these pair nicely with innovative dishes like Gorgonzola shrimp, Truffle sashimi, lobster roll, the Shoyu roll, and salmon tartar, to name a few. These dishes incorporate not only traditional ingredients like Japanese ginger but also surprises like truffle oil.

Whether you are visiting Los Cabos, México City, or Nuevo Vallarta, you would be remiss if you didn’t visit Nick-San, which will undoubtedly exceed your expectations and open your eyes to a new gastronomic experience.