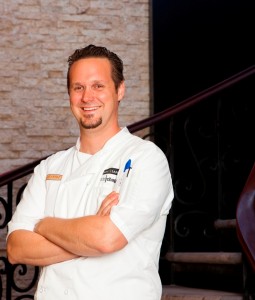 Chef Tadd Chapman has changed the way we eat and talk about food in Los Cabos. During a short time span, he has introduced several San José del Cabo eateries—some he started, some he sold, and some he revamped—including three very popular establishments.

The first location is named Habanero’s Gastro Grill & Tequila Bar (www.habanerosgastrogrill.com), which is named after the habanero chile pepper and opened in October 2004. The restaurant serves European-style bistro fare with a Mexican twist, which Chapman calls Mexican fusion. In 2010 Chapman christened Don Sanchez (www.donsanchezrestaurant.com), reinventing it as a fine dining concept in November 2012. He owns the building in which Don Sanchez is housed and, later that year, he opened the Retro Burger Bar (www.retroburgerbar.com) in the space above it. The three restaurants are as different as their names imply.

Habanero’s began as a sidewalk café. Picture a European bistro, where you can sit outside and people watch. These are not the norm in Los Cabos, so Chapman shielded the area around Habanero’s with areca palms so patrons could enjoy breakfast, lunch, and dinner with some privacy. When the opportunity presented itself, Chapman expanded into the space next door and added an air-conditioned tequila bar—complete with 100-plus tequilas—while maintaining the open terrace to take advantage of Los Cabos’ beautiful weather. In 2005, his mother, Christina Chapman—an excellent chef in her own right—joined him as a venture partner in Habanero’s.

While primarily a dinner spot, the restaurant has established itself as a morning favorite. It is especially popular on Sunday mornings, when the 15-item menu includes four varieties of eggs Benedict and a mixture of Mexican and American-style dishes. All are available for less than $9 U.S. and come with coffee and fresh fruit.
Specials are the norm here. On Taco Tuesdays, you can select from those made with lobster, fish, shrimp, and pulled pork. Huge “designer” salads are also popular, as is Mexican fare, specialty burgers including one called Sloppy Texas Burger made with tequila barbecue sauce, and pasta dishes. The top-selling dinner is the surf and turf for two. On any particular day, the dinner special may be arrachera served on top of mashed potatoes with sautéed rajas and onions in a delicious cream sauce. It is worth a visit to find out what chicken Voodoo and chicken Piazza are. Sinful desserts—all made by Chapman’s mother, Christina—include Mexican coffee mud pie. 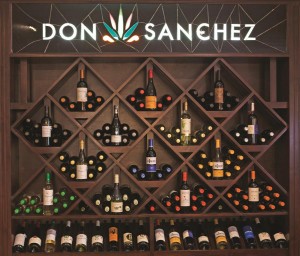 Chapman gives guests a fine dining experience at his multilevel Don Sanchez restaurant, which is located in the center of the popular commercial area of San José del Cabo. The elegant entry feeds into an impressive wine room and tapas bar for an intimate dining option with Ezra Katz art pieces from the Ida Victoria Gallery adorning the walls. Continuing through the upper level, there is a stairwell leading down to a massive hacienda-style courtyard. There are fountains, fire pits, and wall friezes depicting Mexican architecture. Specialty drinks include refreshing Baja sangria made with red wine, brandy, Cointreau, lime, cassis, orange juice, and sparkling water. Another must-try is the jalapeño basil margarita.

Chapman says he is proud to serve locally sourced ingredients, including organic farm products and seafood from the Sea of Cortés like oysters and clams from Northern Baja. His goal, he says, is to bring in live geoduck clams, which are native to North America’s West Coast and one of the largest clams in the world. Chapman describes Don Sanchez’s food as contemporary Baja fusion, and the seasonal dinner menu includes a rich cioppino with mussels, a duo of crusted crab cake and fried soft shell crab, seafood, lamb shank and beef from Sonora, México.

Most evenings, guests can enjoy live sax, guitar, or trumpet performances. What has become especially popular is the chef’s tasting and pairing lunch, which features five courses for a wining and dining experience by reservation only from noon until 3 p.m. Whatever the chef’s whim is on that particular day—and whatever is in season and available—is what you can expect. Don Sanchez also offers full-service event dining for weddings, custom events, private parties, groups, and incentive programs for groups of four to 300.

Always thinking ahead, Chapman is entertaining thoughts to introduce a Cultural Flavor of Baja theme night, perhaps with foods from Ensenada and traveling down Baja to Los Cabos with indigenous foods and folkloric dancing performed by a local dance troupe. Another idea formulating in the fast-thinking, fast-talking chef’s head is promoting organized wine tastings and wine flights with a prix fixe menu. 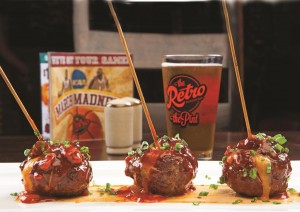 On the opposite side of the culinary spectrum is Chapman’s Retro Burger Bar, which opened in November 2012. The name itself takes one back to an earlier time, a revival for the recent past. Chapman calls this eatery his “jive burger dive.” With 13 big-screen TVs, myriad beer and specialty drinks, and live music in the evenings, this is a hopping spot. It’s open 11 a.m. until 2 a.m.— the only bar in San José del Cabo that stays open that late—making it the perfect place to wind down the evening with some munchies. Where else can you get a bowl of fresh popcorn, root beer floats, banana splits, classic burgers made on house-baked sesame seed buns, or cheeseburger lollipops? Chapman has added his gourmet touch to items such as Street Corn Taco Salad. Bring the family and celebrate the kids’ birthday parties, ages 1 to 99.

Ever mindful of ensuring that the quality of food is top-notch, Chapman stays ahead of the game by constantly checking new trends and educating himself. He is an expert in tequila and wines with no favorites: “It depends on the time of day and the cuisine,” he says. He is strict in his management style but gives the more than 65 staff members in all three restaurants a lot of freedom. He wants them to succeed. He is continuously restructuring and recently hired a new chef who will focus on the Don Sanchez facility. Chapman is among the top culinary chefs in Los Cabos but is quick to say he is proud to be among so many good chefs. He is a humanitarian and has been giving back to the community by working with LIGA MAC as well as the Chefs al Rescate (Chefs to the Rescue) program to fund a wheelchair factory for disabled children, and he has been a participant in the Los Cabos restaurant association’s Sabor a Cabo, a gastronomic fundraiser for the fire departments and Red Cross, as well as numerous other charitable organizations.

Not resting on his laurels—he continues to appear on TV and receive various “Best Of” awards—Chapman is already planning his fourth eatery. It is still in the planning stages, but we can expect more of the same diversity in food and design. So the family of three will be expanded to at least four in the very near future.