Your complete guide to whale watching in Los Cabos

Los Cabos has everything you could want in a great vacation: excellent restaurants, first-class hotels and resorts, beautiful beaches, and giant whales. In fact, Los Cabos is internationally recognized as one of the world’s best spots for whale watching.

Whale season in Los Cabos typically lasts from late December until early April. During this time, many whales venture south, traveling thousand of miles from the ice-cold north Pacific. (We’re not the only ones who enjoy the weather of Los Cabos in the winter.)

The whale you’re most likely to see during your Los Cabos vacation is the humpback. That said, there are several types of whales and dolphins that tour the Sea of Cortés, also known as the “aquarium of the world.” The impressive biodiversity means you can spot all kinds of marine mammals, from the largest on Earth—the giant blue whale—to the petite vaquita, a rare type of porpoise that is endemic to the northern part of the Sea of Cortés, measures about three-and-a-half feet, and weighs just over 100 pounds.

These whales come to Los Cabos with a long to-do list: They’re here to mate, give birth, and feed on the region’s rich marine life.

What we commonly refer to as whales can actually be divided into two groups: those with teeth (think orcas and sperm whales) and those with baleen (filter feeders like humpbacks).These filter feeders eat plankton, krill, small crustaceans, and schools of small fish.

Here’s a little info on the whales you can expect to see: 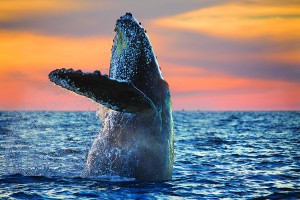 Humpback whales are the most acrobatic of all the baleen whales. You can spot them from miles away because they splash when breaching, slapping the water with their long flippers or tails. Researchers suspect they do this in an effort to communicate with each other and to rid themselves of the barnacles on their bodies…plus, it looks like a lot of fun. You can identify a humpback whale by its dark color and because the big hump on their—you guessed it—back (they show it off when preparing to dive). An adult humpback can measure up to 40 feet long, weighing around 1 ton per foot. Fun fact: Females are bigger than males.

The gray whale is the second most common whale you’ll see during the winter in Los Cabos. These whales are around the same size or smaller than the humpback. The “gray whale” name comes from the gray patches and white mottling on its dark gray skin. They were once called “devil fish” because of their fighting behavior when hunted, but now some of these whales approach boats to interact and even act pet-like. A gray whale has set a new record for the longest tracked migration to by a mammal. A female gray whale named Varbara successfully made a round-trip journey from her home off the east coast of Russia to Cabo San Lucas 14,000 miles away over a period of 172 days.

Everybody’s heard of Moby Dick, the most famous sperm whale of all. These master divers can hold their breath for up to two hours and go as far as 10,000 feet deep as they search out the famous, never-seen-by-humans giant squid. 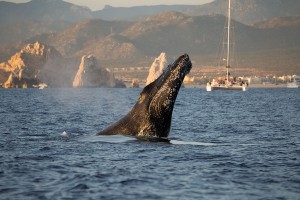 The blue whale is the largest animal to ever exist on Earth. In fact, it’s so big that a baby could crawl inside its arteries and a Volkswagen Beetle could park itself inside its heart. Not too many people have been lucky enough to experience a blue whale sighting, but there’s no better place to look for them than in the Sea of Cortés. Blue whales can reach 100 feet long and weigh up to 170 tons despite the fact that they feed on the smallest creatures in the sea. Long and slender, the blue whale’s body can be various shades of bluish-grey dorsally and somewhat lighter underneath, Blue whales feed almost exclusively on krill (small shrimp-like crustaceans). Fun fact: There’s no whale watching boat in Los Cabos larger than a blue whale.

Now that we’ve told you about the whales you’re most likely to see while in Los Cabos, the question is: How will you go whale watching? Here is a list of some of our favorite tour providers in the area:

Buccaneer Queen: The pirate-themed ship invites enthusiasts to join its swashbuckler crew in a whale watching adventure. To learn more, go to www.buccaneerloscabos.com.

Cabo Expeditions: This leader in eco-friendly adventures offers whale watching tours on small, speedy boats known as Zodiacs (these are the same ones that Navy SEALs use) that feature hydrophones so guests can hear the whales. Groups are limited to 15 or fewer people per boat. Learn more at www.caboexpedtions .com.mx.

Cabo Sails: Select from a fleet that has sailboats measuring anywhere from 28 to 44 feet in order to enjoy a private, eco-friendly whale watching tour. These tours include not only whale watching but also plenty of sightseeing. Learn more at www .cabosails.com.

Sail Baja Adventures: The bilingual Sail Baja crew is all about offering customizable tours, and here you can choose to go whale watching on either a sleek catamaran or 32-foot yacht. To learn more about the two vessels and the tour options, go to www.sailbajaadventures.com.