A guide to golf in Los Cabos
By Chris Sands 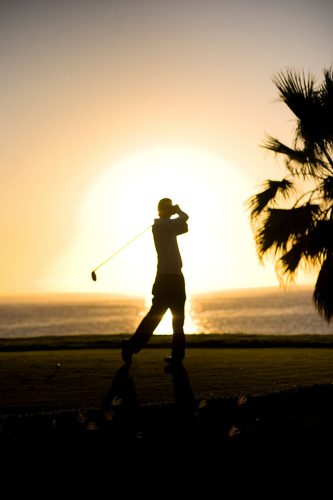 Los Cabos is an unparalleled region for golf. Three of its 14 courses are currently ranked among the 100 best in the world—Cabo del Sol’s Ocean Course, Querencia, and the Dunes Course at Diamante—an achievement that places it among a handful of the top golfing meccas around the globe. The other regions with this sort of pedigree, however, are steeped in tradition, with legendary lore, and a history of hosting famous tournaments. All of Los Cabos’ sculpted seaside masterpieces, on the other hand, debuted in the last 25 years.

The first golf course in Los Cabos was Punta Sur (www.vidanta.com) in San José del Cabo, which opened in 1987. Now officially a part of the Grand Mayan, this little nine-hole layout is still a favorite of beginners and budget-conscious visitors. The big golfing boom, however, began in the early 1990s, when three ambitious developers—Don Koll, Eduardo Sánchez Navarro, and Ed Reisdorf—brought in respected designers to craft world-class courses at Palmilla, Cabo del Sol, Cabo Real, and Campo de Carlos (now the Cabo San Lucas Country Club). The 18-time major champion Jack Nicklaus designed the first two, and he has since designed four more, making him the unofficial godfather of golf in Los Cabos. Other big names quickly followed. Major champion Tom Weiskopf designed the Desert Course at Cabo del Sol, and Davis Love III and Tiger Woods have each designed courses at Diamante on the Pacific coast of Cabo San Lucas. Love’s Dunes Course was the first true links–style layout locally, and it was immediately acclaimed as a masterpiece upon opening in 2009. It’s currently ranked the No. 1 course in México by Golf Digest and No. 38 in the world by Golf magazine. 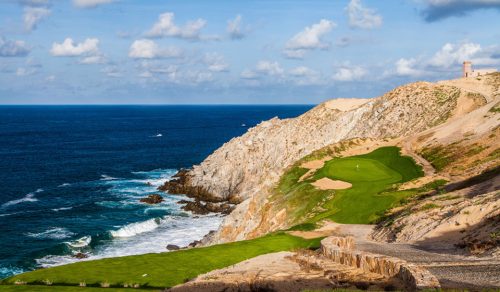 What makes golf in Los Cabos truly special, and completely unlike any other place in the world, is its singular combination of desert and mountain terrains featuring gorgeous views of the Pacific Ocean and Sea of Cortés. The arid desert climate creates challenges, of course, but the vast majority of local courses provide high-quality course maintenance, and adhere to responsible environmental standards. This tricky “twofer” is primarily accomplished through the use of gray water and seashore paspalum. The former is repurposed effluent water. The latter, as Quivira director of golf Antonio Reynante says, is “a drought-tolerant, disease-resistant cultivar that can tolerate brackish water, and requires a fraction of the fertilizers, herbicides, and insecticides of normal grasses.” 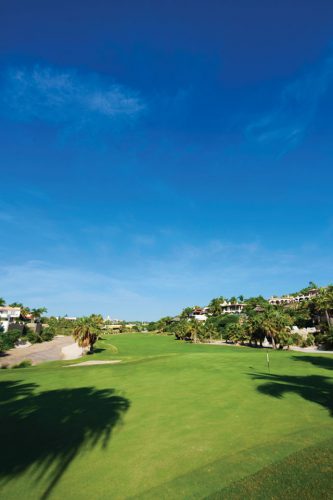 Although there are no courses in Cabo San Lucas proper, there are four world-class layouts within chipping distance. Nicklaus’s magnificent new cliffside Quivira Golf Club (www.quiviragolfclub.com) has been racking up awards and accolades since premiering in 2014. Beyond Quivira, on the Pacific coast, lies the upscale Diamante (www.diamantecabosanlu cas.com) development, home to Tiger Woods’s parkland-style El Cardonal and Love’s majestic Dunes. The Roy Dye-designed Cabo San Lucas Country Club (www.cabosanlucascountryclub.com), by contrast, is just east of the city, and it is the only course in the area to boast views of the granite rock formations that extend to Land’s End. Best of all, its driving range is open at night, so visiting duffers can tighten up their swings while simultaneously working their way through buckets of ice-cold cervezas.

The greatest concentration of courses is found in the 20-mile coastal corridor that connects the cape cities. Nicklaus’s landmark layouts at Cabo del Sol (www.cabodelsol.com) and Palmilla (www.palmillagc.com) are mandatory stops for serious golfers. In an interview with Baja Explorer magazine in 1992, Nicklaus said of the 17th and 18th holes at the then-new Cabo del Sol Ocean Course: “I firmly believe that these are the two best finishing holes of any course in the world.” Renowned golf course architect Tom Fazio is the only true challenger to Nicklaus’s supremacy in the Tourist Corridor. His superb Querencia recently made its debut on Golf Digest’s World 100 list, and he also designed the newly opened Chileno Bay Golf Course. 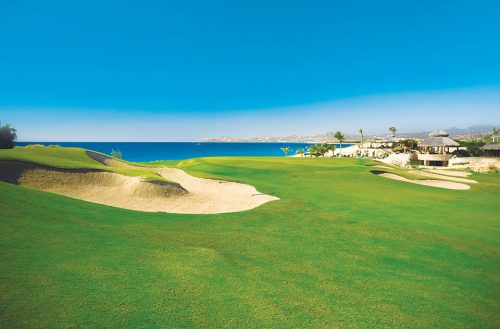 Sánchez Navarro and Nicklaus are the marquee names on the San José del Cabo golf scene. The former, an heir to the Corona fortune and a major Los Cabos developer, heads Grupo Questro and was the visionary force behind the luxury Puerto Los Cabos community located just outside the city. Grupo Questro (www.questrogolf.com) administers the Nicklaus layout at Club Campestre, as well as the unique loop at Puerto Los Cabos: the world’s only composite design from Nicklaus and Australian champion Greg Norman. Questro also manages Robert Trent Jones Jr.’s masterful Cabo Real course in the Tourist Corridor, which helped put Cabo on the golfing map when television cameras caught whales breaching near greens during the 1996 PGA Senior Grand Slam.

Several of the top courses in Los Cabos are private or have restricted access. The world-class courses at Querencia and El Dorado are both private, as are the two courses at Diamante. Since fractional opportunities are available at Diamante, however, it may be possible to play the Dunes by attending a time-share presentation. The acclaimed new Nicklaus course at Quivira is restricted to guests at the four local Pueblo Bonito resorts, or owners at neighboring Quivira, Copala, Novaispania, and Montecristo Estates luxury developments.

Despite the many private courses, visiting golfers will have no trouble getting a tee time at an amazing course. Cabo del Sol’s Ocean and Desert courses, and Grupo Questro’s trio of challenging layouts–Cabo Real, Club Campestre and Puerto Los Cabos–are all open to the public. So too are Palmilla, Punta Sur, and the Cabo San Lucas Country Club.

More golf projects are always in the pipeline, with new luxury resorts engaged in a continual quest to outdo the existing competition. Puerto Los Cabos has plans to expand its composite nine-hole designs from Nicklaus and Greg Norman into two separate courses. Norman is also involved in the design of a course for the highly anticipated Pacific coast development Rancho San Lucas. Tiger Woods, too, is returning to build on his local legacy. He’s now working on another course for Diamante, to be called the Oasis. Montage Los Cabos, meanwhile, originally wanted a course from smooth swinging Masters champion Fred Couples to accompany its new hotel overlooking Santa María Bay. Instead, it will unveil a barefoot pitch-and-putt course in 2017.