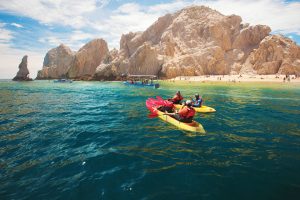 Confession: I’m one of those people who came to Cabo on vacation and never left.

Now it’s not the sort of impulsive decision I’d recommend to others, particularly if you have kids and a mortgage. But there is an intoxicating sense of freedom that came with it, as I completely changed the trajectory of my life…while simultaneously trying to sip cerveza and not fall out of a hammock.

Six years later, it seems a little surreal. What was I thinking? What was it about Los Cabos that appealed to me so deeply and so immediately that I’ve been here ever since?

The physical beauty and the unique geographical features of Baja California Sur were certainly major factors. I had never before seen a place where mountains descended to desert, desert became beach, and beach became sea…all in the space of a few short miles.

Where else do two major bodies of water exist in such close proximity, separated only by a narrow half-mile headland of evocatively shaped, 30-million-year-old granite monuments? Where else can you catch a marlin, go off-road racing, dive a living coral reef, climb a mile-high mountain, see humpback whales breaching, play three of the world’s best golf courses, and swim in hidden hot springs—all on a single tank of gas?

And it is not just the staggering diversity of awe-inspiring vistas that make Los Cabos so special but also the myriad ways to enjoy them.

I’ll never forget the first time I went sailing in Cabo San Lucas Bay and watched the sun explode in a burst of color beyond Land’s End from the deck of a 125-year-old gaff-rigged schooner. It was a truly magical and life-altering experience. Sunset tours remain one of my favorite local activities. I’m a big fan of Tropicat’s (624-143-3797) wine and jazz sunset cruises, which provide cool vibes and up-close looks at the granite rock formations at Land’s End, as well as brisk sailing beyond the protected bay; and Caborey (624-143-8260) has been the dinner cruise standard-bearer for decades, following up five-star dinners with lively floor shows featuring Latin American singing and dancing. Turns out tango makes everything better, even already-great filet mignon.

Dining was another significant contributor to my infatuation with Los Cabos. México and Italy are, in my opinion, the best food-friendly destinations in the world. Alcaravea Gourmet (624-143-3730) provides a taste of both, thanks to the Mediterranean mastery of Mexican-born chef Enrique Diaz. But my love for Alcaravea goes beyond the excellent fare. I love the eclectic atmosphere, the wrought-iron entrance garlanded with trained vines, the eclectic paintings, and the gracious staffers who treat even first-time visitors like long-lost regulars. Alcaravea is one of those “only in Cabo” places that so attracted me six years ago. It’s a unique fusion of disparate elements, but somehow they all work.

The same goes for Pitahayas (624-145-8010). At the signature dining establishment at Sheraton Grand Los Cabos, Hacienda del Mar, Pitahayas chef Volker Romeike blends diverse Pacific Rim influences from México, Hawaii, Japan, China, Korea, Thailand, the Philippines, and beyond. It’s a staggering challenge, but Romeike doesn’t just make it work, he makes it special. The setting, together with the menu, creates a unique experience, with tables flowing outward in concentric circles, bounded by cactus, flashing lights, colorful ornaments, and moonlight glittering on the Sea of Cortés.

Abundant day-tripping options were and are another wow-factor attraction. It’s less than a one-hour drive from Cabo San Lucas to Todos Santos, the first and southernmost pueblo mágico on the Baja Peninsula. This Pacific Coast artists’ colony features some of the most remarkable architectural monuments in the region: beautiful old brick buildings that date to the town’s days as a 19th-century sugarcane capital. This coastal jaunt also offers interesting detours, from El Picacho de la Laguna—at nearly 7,000 feet, the highest peak in the Sierra de la Laguna mountain range—to the traditional village of La Candelaria, famed for its mountain potters.

On the East Cape, dirt roads and small fishing communities provide a taste of what Los Cabos was like 50 years ago, during the early days of tourism. Los Barriles and Buenavista deliver big-time game and billfishing, Nine Palms and Shipwreck tempt surfers with big summer waves, and Cabo Pulmo is a year-round mecca for dive enthusiasts. This picturesque village features one of the oldest and largest living coral reefs in the Western Hemisphere, and, thanks to its status as a protected marine sanctuary, the highest concentration of marine life in the Sea of Cortés.

The essential day trip destination, however, is La Paz, the capital city of Baja California Sur. Not only is La Paz the seat of history and culture in the region but it also boasts the most spectacular beaches this side of Quintana Roo. La Balandra was recently voted the most beautiful beach in México, and neighboring playas like Pichilingue and El Tecolote offer similarly pearl white sands and sparkling turquoise waters.

The latter two are actually superior when it comes to regional culinary specialties like chocolatas (chocolate clams) and marlin en escabeche, and El Tecolote provides magnificent views of the uninhabited island of Espíritu Santo. The city itself is like a vintage picture postcard come to life. The three-mile long malecón is gorgeous, an art-studded boardwalk framed by sun, sea, sand, and the terminus of the El Mogote Peninsula. The malecón comes alive in the evening, when local families stroll or bike along the seaside promenade, backlit by one of one of the capital city’s famous sunsets.

But despite the region’s astonishing beauty—from Los Cabos to La Paz—it was as much the people as the places that persuaded me to stay. I found the residents and their warm, welcoming hospitality utterly charming when I arrived six years ago, and I still do today. I suspect you will, too.

In fact, I wouldn’t be a bit surprised if you wanted your vacation to last a lifetime. Sometimes that happens.