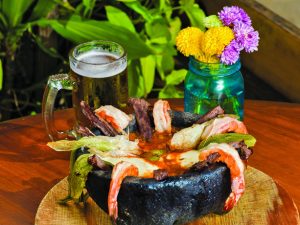 The best pizzas in Cabo San Lucas aren’t found in Italian-themed trattorias or pizzerias but instead under a palapa on the marina boardwalk, in a restaurant most notably frequented by fishermen. Captain Tony’s isn’t sharing its secrets, although one is rather obvious: The superb thin-crusted pies are cooked in a traditional brick, wood-fired oven, which gives them much of their distinctive taste and aroma. If you can try only one, go with the signature house selection topped with mushrooms, tomatoes, black olives, basil, and pesto. For pairing, order an ice-cold Mexican cerveza; a lime-wedged, umbrella-garnished margarita; or even a nice rosé from the oldest winery in North America (Casa Madero in Valle de Parras, México). Not in the mood for pizza? Really? Not even the Captain Tony with shrimp and bacon, or the Texan with beef, onion, tomato, and jalapeños? OK. OK. Don’t worry.

The Captain also serves up breakfast omelets, burgers, deli sandwiches, and an ocean of fresh seafood options. Start small with a ceviche or shrimp cocktail, then go big with the catch of the day, steamed with shrimp and herbs, and served with rice and veggies; or the Captain Tony tuna fillet in a balsamic reduction. Mexican specialties, too, are consistent satisfiers, from tacos and fajitas to enchiladas and chimichangas. Cabo San Lucas Marina (behind Tesoro Los Cabos Resort), Cabo San Lucas, (624) 143-6797, www.piscesgroupcabo.com. Daily 6 a.m.–10 p.m. MasterCard, Visa, and vouchers accepted. $–$$ C.S.