Two decades in, a longtime resident remembers
what inspired her to make the move to Los Cabos
By Sandra A. Berry 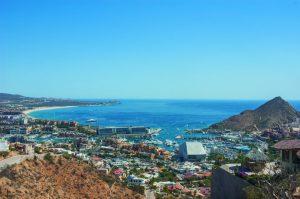 This is not a story of love at first sight.
It was 1994, and I was enjoying a vacation cruise. This is a favorite pastime, and one that had taken me to such destinations as Hong Kong, Athens, and Portofino in years past.

As we arrived in the harbor, I was impressed by the unique rock formations…but not enough to brave the hot, humid September weather and disembark. Instead, I stayed on the ship with plans to enjoy air-conditioning, pool time, and the delicious food onboard.
What a mistake! My friends arrived from their day in Cabo San Lucas raving about their glass-bottom boat ride to Lover’s Beach and getting to see sea lions and the iconic arch at Land’s End. I knew I had missed out.
The next fall, when it came time to celebrate our wedding anniversary, my husband and I decided Cabo San Lucas would be the perfect destination. We flew down with another couple; the men to play golf, the ladies to shop. The November weather was perfect! We had left chilly weather in San Diego and were delighted with sunny afternoons and balmy evenings. We checked into the Palmilla Resort (before it was remodeled and renamed the One&Only Palmilla).

Restaurant recommendations included a trailer park and a place called the Office. Why would we want to eat in a trailer park or in an office? Curiosity won out, and we were pleasantly surprised when both turned out to be delightful. One was under a 100-year-old tree on grounds that, story would have it, housed the oldest settlement in Cabo, a trading post where pirates stocked up on provisions. The other suggestion offered beachfront dining; we had our toes in the sand as we enjoyed a delicious Mexican breakfast, watching water activity on the bay and a cruise ship in the harbor. These experiences and pictures became indelible in my mind. My husband was not too impressed. “It’s just a T-shirt town,” he growled—and, at that time, it was not much developed—but I also realized he’d had a not-so-great day on the golf course.
It was a surprise then, as you can imagine, when my husband suggested the following year that we return for our anniversary. We checked into the Finisterra Resort and immediately went to the Whaling Bar, where we watched whales frolicking in the bay. It was Thanksgiving week, and I was excited to return to what was then known as the Trailer Park (now La Golondrina) to eat the best lobster I remembered from the previous year. There were a few good restaurants in town, namely Romero & Julieta, which just recently celebrated its 30-year anniversary. Da Georgio’s is now Sunset Mona Lisa with the same incredible view of the arch, and Pancho’s was the place for Mexican food, and it still is on every visitor’s list. La Dolce was named La Dolce Vida at that time, and Baja Cantina and Solomon’s Landing were the “Cheers” locations; they still are the places to meet up with friends in their newly remodeled facilities. 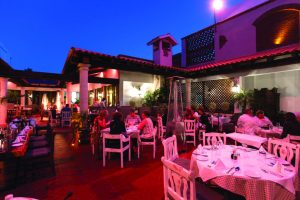 My husband decided he wanted to peruse some real estate—as we sometimes did in our travels—to get an idea of the market. We found a real estate agent and, after looking at a few available homes for sale, ended up looking at a vacant lot on a mountainside. Before I knew it, we were meeting with the developer and signing on the dotted line. We now owned a lot in one of the most desirable locations in Cabo. I knew we had made the right choice. Yes, we have three months of hot weather, but the other nine months are pure paradise. And that view of the bay is year-round.
The next few years flew by. Construction began, and I was charged with overseeing it. We rented a house and kept a car here. I began to get to know the city, the restaurants, the beach, and all the activities. Every out-of-town guest was treated to a glass-bottom boat ride to Lover’s Beach and many fine restaurants.
The only drawback was the difficulty of making local friends. I realized I had to join in, become involved. There was a ladies social club I was invited to attend with the funny name of Los Cabos Tomatoes (Webster’s defines “tomato” as slang for “an attractive lady”). It was August, and about 10 ladies attended. Everyone was dressed casually, wearing shorts, and most brought a covered dish and beverage. I attended again a few months later and was surprised at the large number attending. This was just what I was looking for. At the time, there were about 100 ladies who attended periodically, mostly snowbirds and a few permanent residents. The usual number attending during the “season” (November–May) was perhaps 30–40. They met twice a month, usually in a residence. The group was formed in 1991 by a new resident who asked her real estate agent to bring a few of her friends to her new home so that she could meet and make some new friends. They had such a good time that they agreed to do it again in two weeks and asked that everyone bring a friend. It’s been going on ever since.

Today the organization boasts more than 650 members. It is strictly a ladies social and networking club that fills the void for those wanting to meet other ladies on a social level and to learn what it going on in the community. Many members own businesses in Los Cabos, and this is a way for them to promote their wares while enjoying the camaraderie offered in a friendly environment. This has been a lifeline for me. I volunteered to write the meeting reports and am now and have been the general coordinator for about 16 years. While the organization does not support any one charity, all members participate by supporting various fundraisers in Los Cabos.

Many changes have taken place in the 20-plus years since that fateful cruise. Our first visit was before Costco, Walmart, Home Depot, Office Depot, or McDonald’s. We would shop instead at a small seafood market, an independent grocery for meats, and a farmers market for produce. Most of those are now gone, and I do miss them. But we appreciate the conveniences of the larger stores and still have farmers markets. What hasn’t changed and what still keeps me here are the gorgeous views, climate, and friendly people. It is truly a paradise.