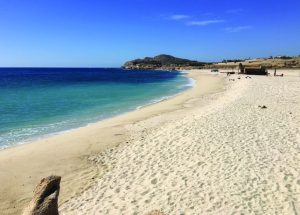 Nude beaches in Los Cabos are a perpetually popular search topic on our sister site, LosCabosGuide.com, despite the fact, or perhaps because of the fact there really aren’t any…at least not officially.

Public nudity in México is illegal, although there are exceptions to this rule. Playa Zipolite in Oaxaca, por ejemplo, famously has a nude-friendly section at its western end, one that is officially sanctioned. This sort of thing is a rarity, however, in a predominantly Catholic country with largely conservative views on the subject.

Privately, some adults-only resorts in México offer topless or clothing-optional zones. Temptation’s resort in Cancún is a well-known example of the former; Karisma’s Hidden Beach Resort on the Maya Riviera a notable instance of the latter.

Years ago, there was a Desire Resort in Los Cabos, an adults-only property that occasionally showed up in late-night movies on Cinemax. It’s gone now, and the secluded beachfront areas once recommended to visiting couples interested in nude or topless sunbathing are no longer secluded, thanks to steady population increases and a recent building boom that birthed a host of new luxury resorts and real estate developments along the coastal corridor that connects cape cities Cabo San Lucas and San José del Cabo. 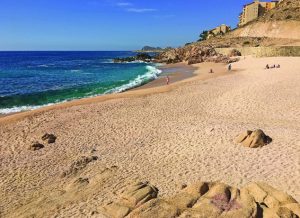 That’s not to say, however, that there aren’t any options for those who’d like to get back to nature, or at least back to au naturel.

The simplest and best bet is to rent a privately owned home or villa. Ninety-nine percent of such properties in Los Cabos feature swimming pools and other outdoor spaces, and many also offer beach access. While it is true that all beaches in México are by law public, it is likewise true that not all are easily accessible by the public. Thus, discerning renters will be able to find accommodations with mostly private beach areas.

For the wild at heart, the Pacific coast between Cabo San Lucas and Cerritos is still home to many secluded beaches. Intrepid explorers may even discover naturally occurring hot springs, although these are rare, and their locations zealously guarded by in-the-know locals. The East Cape, too, has its sparsely visited seaside treasures, with the added benefit of safe swimming and snorkeling.

But let’s be clear:  You will be breaking the law. So if you are approached by police while in a state of undress, there is no use claiming harassment or blaming the situation on someone else. You’ll be correctly and legally cited.

That’s an unlikely scenario, however. More likely is an encounter with local residents, in which case a bit of modesty in deference to local customs is much appreciated.