At the press conference marking her 100th day in office, Castro Guzmán reflected on what has been accomplished so far: the activation of treatment plants expanding access to water, increased collection of waste, a plan to rid the municipality of potholes, and 30 percent reduction in city spending. The reduced spending was a result, her office says, of the decision to reduce government office leasing, eliminate computer equipment purchases in the administration’s first year, and for the mayor, as well as her trustees and staff, to donate 10 percent of their salaries toward administration spending.

Safety has also been a top priority for the mayor in her first months as mayor: A life insurance policy is now in place to help families of police officers killed in the line of duty, and a domestic violence unit was created to better serve Los Cabos residents. But public safety does not end there. To mark her first 100 days in office, Castro Guzmán issued an exclusive statement to Los Cabos Magazine:

The beginning of the “Safe City” model that we have implemented in Los Cabos arose from the need to unite the three levels of government leadership together. And of course, when we talk about leaders, we are also talking about all the business men and women who have made this great touristic development possible. 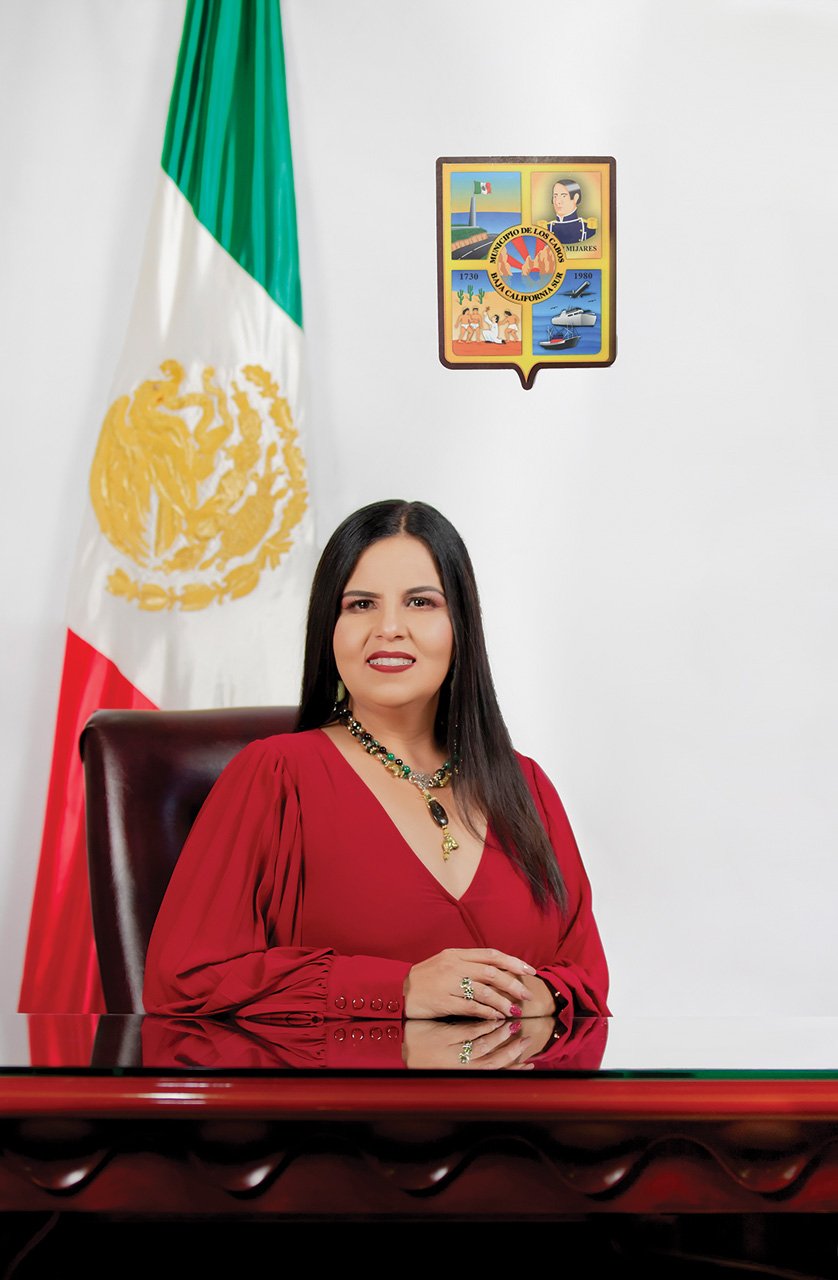 The key word of our safety model is coordination. Safety cannot have different colors, different agendas, different themes or different plans. We must be blind to the different political parties within our city and state. We must all share this great responsibility to ensure the safety of all our citizens.

We are currently using a ‘’Safe City” model that we have at the municipal level as an example to each of the municipalities that are tourist destinations with beaches. We have so far, implemented that model in three of 15 cities that meet this tourist beach destination criteria. What is our intention? Our plan is to talk about what we  have done well.

We have to set aside political differences and use the need and the will to work in coordination. When I talk about the magic word “coordination,” I say it because if we, as government leaders, maintain ourselves in a permanent dialogue on the subject of security with the business community, then everyone is seated at the same table. What happens if we do not comply with our promises as politicians or as government leaders? Obviously, the community will see this as an instable city.
The founders of this city who have economically supported this area from the beginning, see when we have not done a good job of governing, and to them and every one of our citizens, safety and security are very important.

The business leaders’ support has been at the heart of the expenses they have assumed in an effort to keep Los Cabos safe for everyone. The businessmen and women of Los Cabos have worked in longstanding coordination with the other branches of government that we can count on today with the navy corps’ presence.

We have to work together because Cabo requires about a 1,000-member police force and right now we only have 500 officers. We are expecting another 18 policemen by April 30, and we plan to incorporate a tourist police force that is badly needed right now.
When we speak of a safe municipality, we are talking about a municipality that is ready to receive tourists but is also ensuring the safety of its citizens. We cannot believe that the city’s security only concerns the beautiful areas of the Los Cabos, because security involves everyone within our city limits. When my husband and I arrived in Los Cabos, we joined an effort that was providing results in terms of city-wide safety.

What do we want? When we say we want a safe municipality of peace, we are saying that we are going to do everything in our power to make it so. When talk about having a safe and secure city, we are talking about a “Safe City” model that we have implemented during the last year that we have been in office.

A “Safe City” model in which we all are seated at the same table. A safe city model in which the military presence will be here, in which the federal police will arrive, as well as Acedena, and the navy personnel that are already here. Our plan is to create a containment barrier in which we can help reduce delinquency.

Thanks to all of our protective agencies of our “Safe City” municipal model. A great municipal model that guarantees both citizens and visitors a city on permanent safety alert because crime does not disappear, and we need to be ready and waiting for it. Why? because by permanently working to maintain a safe and secure city, from dusk to dawn, we can achieve our safe and secure city goals with the help of the navy, Acedena, federal police, PFR, and of course our local police officers.

What do we have to do? Work on prevention and in order to do so, is why we are investing much of the budget towards the comforting tranquility of a safe and peaceful city. Working around the clock towards the prevention of crime.