By Sandra A. Berry
It can be said that Jorge Viaña runs the show. 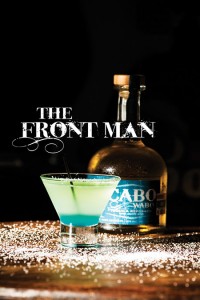 But that has not always been the case for the general manager and partner at Cabo Wabo—Los Cabos’ most famous rock ‘n’ roll nightclub—whose path to success has taken him across the Americas.

Viaña was born in Lima, Peru. His father’s work with a Peruvian airline allowed him to travel throughout South America, México, and the United States, where he attended high school in California. He worked in various hotels, including the Hyatt Regency in México City, before moving to Cabo San Lucas in 1976. Here, he found work in the region’s restaurant scene, then still in its infancy.
In 1988, while working at the Twin Dolphins Resort, he happened to meet Van Halen rocker Sammy Hagar. The singer-songwriter was staying at the hotel with his family. Hagar asked Viaña for a ride into town so that he could buy some supplies. Viaña agreed but when he explained he couldn’t take Hagar back to resort because he had to go to his second job, Hagar asked why he held down two jobs. Viaña replied he was saving money to open a club of his own.

During the next couple of days, Hagar mentioned to Viaña that he wanted to build a tequila bar and little club where he could perform. Hagar asked for his phone number, and Viaña wrote it on a piece of paper. Apparently, Hagar, upon returning to the United States, attempted to call Viaña several times. But Viaña’s wife did not speak English and would hang up each time he called. About a week later, a package arrived at Viaña’s home. Inside, Viaña found an answering machine and a note from Hagar asking him to hook it up so Hagar could at least leave a message. Up until this point, Viaña had thought Hagar “was just another gringo with a wild dream.” They spoke on the phone, and Hagar invited Viaña to San Diego to see him perform with Van Halen. A few days later, airline tickets for Viaña and his family arrived. The family was met in San Diego with a limousine and driven to a first-class hotel. Viaña was handed an envelope with tickets to the show and $1,000 U.S. spending money.

The concert was enough to convince Viaña that Hagar was the real deal. He attended a party backstage, and there Hagar introduced him as his new partner in a nightclub he was going to build in Cabo San Lucas. That was the start of a loyal friendship and successful business arrangement.

Even though the club is internationally known, some may wonder how the name came about.

The story goes that early one Sunday morning Hagar and Viaña were going to their favorite Médano Beach taco stand when they witnessed a man who had obviously pulled an all-nighter and imbibed a bit too much. He was wobbling all over the street. Hagar made a comment about him doing the “Cabo wobble.” From that, the name

Hagar’s passion for tequila kicked in when he decided he wanted to make the best tequila possible. But, his knowledge was limited to shots with salt and lime. So, he went to all the producers in the state of Jalisco until he found what he was looking for, which turned out to be tequila that was the personal supply of one of the families in the area. He reached a deal to produce it in 1996, and that became the Cabo Wabo Tequila. In May 2007, Hagar sold 80 percent of his interest in the tequila brand to Gruppo Campari, the world’s sixth-largest spirits company. Three years later, Campari bought the remaining 20 percent, making Hagar a multimillionaire.Today, Viaña oversees 150 employees and the tequila business. His office upstairs from the club houses a multiscreen security device to enable him to have an eye on the entire property. He checks the kitchen to make sure that the tomatoes for the salsa are fresh and flavorful; otherwise, into the garbage bin they go. Many of the kitchen employees have been with the company since the beginning, which speaks well of his management abilities. Viaña brought his early teachings from his family and his experience working as a manager in various restaurants and hotels to his role at Cabo Wabo. His mother and grandmother were instrumental in teaching him to experiment with food, and, as a result, he considers himself an aficionado of good food and has helped to create the personality of the Cabo Wabo restaurants. He also considers himself a family man—he has two sons, ages 9 and 6—and that, too, is reflected in Cabo Wabo. There’s a children’s menu, and children of all ages are welcome in the restaurant, which is separate from the club.

In fact, there are two restaurants on the premises: an open patio bar that serves beverages and snacks such as nachos, burritos, Buffalo chicken wings with blue cheese dressing, and the other on the upper terrace. The lunch and dinner menus rival those at any upscale eatery in Los Cabos and feature dishes such as chipotle rib eye, tamarind chicken, and cilantro shrimp.The famous Caborita is Hagar’s take on a margarita, except it is made with Cabo Wabo tequila. The signature Waborita combines Cabo Wabo tequila with fresh lime juice, Cointreau, and Grand Marnier.

The multilevel nightclub can seat 450 and has standing room for up to 700. The decor is on the wild side with animal designs, artificial palm trees, and thatched roofs over the bar area. Hagar’s birthday in October brings hordes of fans to Cabo San Lucas from all over the world. They line up around the block beginning in the wee hours of the night before the event waiting to buy tickets. There are four big performances scheduled during the month of October, 2014: the 7, 9, 11, and 13, all in celebration of Hagar’s birthday.

As the reputation of the cantina grew, offers began coming in to open similar venues in other areas. Lake Tahoe was the first offshoot in 2004; it’s located in the lower level of the historic Harvey’s Casino on the South Shore. Las Vegas followed in November 2009. It blends the laid-back Cabo vibe with the excitement of the famous Strip. The most recent location opened on Hollywood Boulevard in Los Angeles. All four locations use the same recipes.

Cabo Wabo Cantina has also been featured on MTV, the Travel Chanel, and many other television networks. It has been voted one of the top-10 party spots in the world. It has its own clothing line with T-shirts, sweatshirts, bags and totes, and a lot more memorabilia. Different bands are on hand every night, and each location welcomes musicians to drop in and play. No matter which location, Cabo Wabo Cantina is a must-visit for tourists to the area. Major cities throughout the world have their iconic tourist attractions, and Sammy Hagar’s Cabo Wabo Cantina helped put Cabo San Lucas on the map, “where the land ends and the party begins.” Jorge Viaña has been there all along to help make it happen.