The Ultimate Guide to Whale Watching 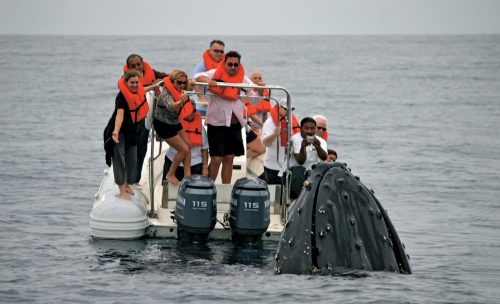 A list celebrity sightings are nothing new in Los Cabos, where luxe resorts and world-class dining are known to attract stars like Jennifer Aniston, George Clooney, and Justin Beiber. But there are no bigger stars than the ones who make their much-anticipated first appearance of the year every winter and stay only through early spring. Of course, we’re talking about whales.

Los Cabos is rightfully recognized as one of the world’s best destinations for whale watching; humans aren’t the only ones to enjoy the region’s bountiful seas and great wintertime temps.

Whale watching season kicked off mid-December and typically lasts until early or mid-April. This is when whales—like many a snowbird—make the journey thousands of miles south from the freezing north Pacific. Known as the “aquarium of the world,” the Sea of Cortés boasts an impressive biodiversity that means you can spot all kinds of marine mammals, from the largest on Earth—the giant 100-foot blue whale—to the petite vaquita, a rare type of porpoise that  is endemic to the northern part of the Sea of Cortés, measures about three-and-a-half feet, and weighs just over 100 pounds.

Nevertheless, the whales you’re most likely to see are the humpback whales.

These whales come to Los Cabos with a long to-do list: They’re here to mate, give birth, and feed on the region’s rich marine life.

Over the next several pages, we hope you will enjoy our guide to not only whale watching options but to the whales you’ll get to observe. But, first, a quick note about whales and how they can actually be divided into two groups: those with teeth (orcas and sperm whales are examples) and those with baleen (filter feeders like humpbacks). The filter feeders eat plankton, krill, tiny crustaceans, and schools of small fish.

Let’s start with the companies that offer whale watching in Los Cabos:

Buccaneer Queen/Cabo Legend: Take a trip back in history to imagine how pirates observed the mighty and majestic sea creatures. There’s no whale hunting involved; just plenty of fun, drinks, and good food. To learn more, go to www.wildcabotours.com.

Cabo Expeditions: This leader in eco-friendly adventures offers whale watching tours on small, speedy boats known as Zodiacs (similar to what Navy Seals use) that feature hydrophones so guests can hear the whales. Groups are limited to 15 or fewer people per boat. For a really unique experience, opt for the sunset whale watching tour. Learn more at www.caboexpedtions.com.mx.

Cabo Mar/Pez Gato/Tropicat: This popular trio of catamarans offers sunset and snorkel cruises throughout the year, and the high-quality experience people have come to expect is what you’ll discover during its whale watching tours, too. To learn more, visit www.pezgato.com.

Cabo Rey: Each spring, you can enjoy the all-you-can-eat breakfast and whale watching tour atop the three-level Cabo Rey. Ask about the discount for kids. To learn more, visit www.caboreycruise.com.

Cabo Sailing: This luxury sailing company offers private and shared tours, which depart from the Cabo San Lucas Marina. There’s an emphasis on eco-friendly whale watching, which allows close-up views without interfering with their routines. To learn more, visit www.cabosailing.com.

Cabo Sails: Design your own private whale watching adventure on sailboats measuring from 28 to 44 feet, or opt for a group tour. Learn more at www.cabosails.com.

EcoCat: The smooth-sailing and eco-friendly EcoCat catamaran offers a comfy perch from which to watch whales, especially during its sunset cocktail tours. You can also buzz along for up-close views on its EcoToo Zodiac. Learn more at www.caboecotours.com.

Humpback whales are the most acrobatic of all baleen whales. You can spot them from miles away because they make a huge splash when breaching (jumping), slapping the water with their long flippers or tails. There’s a belief among researchers that humpbacks do this in an effort to communicate with one another and to rid themselves of the barnacles on their bodies. It’s easy to identify a humpback whale thanks to its dark color and because the big hump on their—you guessed it—back. With all that fun jumping and diving, you’re likely to see a few of these. An adult humpback can measure up to 40 feet long, weighing around 1 ton per foot. Here’s one fun fact: The male humpbacks tend to measure smaller than their female counterparts.

The second most common of the whales you’ll see during your Los Cabos vacation are gray whales, which are known not only for their color but their friendliness. They are roughly the same size as their cousins, the humpbacks. The not-too-creative name comes from the gray patches and white mottling on the dark gray skin of the whales. It’s a better name than “devil fish,” a moniker once used for gray whales because of their fighting behavior when hunted. In contrast to the days when they were hunted, gray whales are thought to have pet-like behavior. In some settings, they will approach a boat close enough for excited whale watchers to reach out and pet them. These whales are also known for their long migrations; they’ve even set the record for the longest tracked migration by a mammal: A female gray whale named Varbara successfully made a round-trip journey from her home off the east coast of Russia to Cabo San Lucas 14,000 miles away over the course of 172 days.

While Moby Dick made the sperm whale recognizable, you’re unlikely to see too many of these. They are master divers that can hold their breath for up to two hours and go as far as 10,000 feet deep to search out the also-famous-but-never-seen-by-humans giant squid.

We think all these whales are pretty big deals, but the blue whale just happens to be the largest…and, by largest, we mean the biggest animal to ever exist on planet Earth. A favorite explanation of its size: A human baby could crawl inside its arteries and a Volkswagen Beetle could park itself inside the blue whale’s heart. Blue whale sightings are rare, but the Sea of Cortés is one of the world’s best places to center your search. How do you identify a blue whale? They can reach up to 100 feet long and weigh up to 170 tons. They are long and slender—despite what the scale says—with a body that has various shades of blue and gray. They feed almost exclusively on krill (small shrimp-like crustaceans).  Y