From Cabo San Lucas to San José and Todos Santos,
the region is alive with creative displays worthy
of your attention. We show you where to get your fill 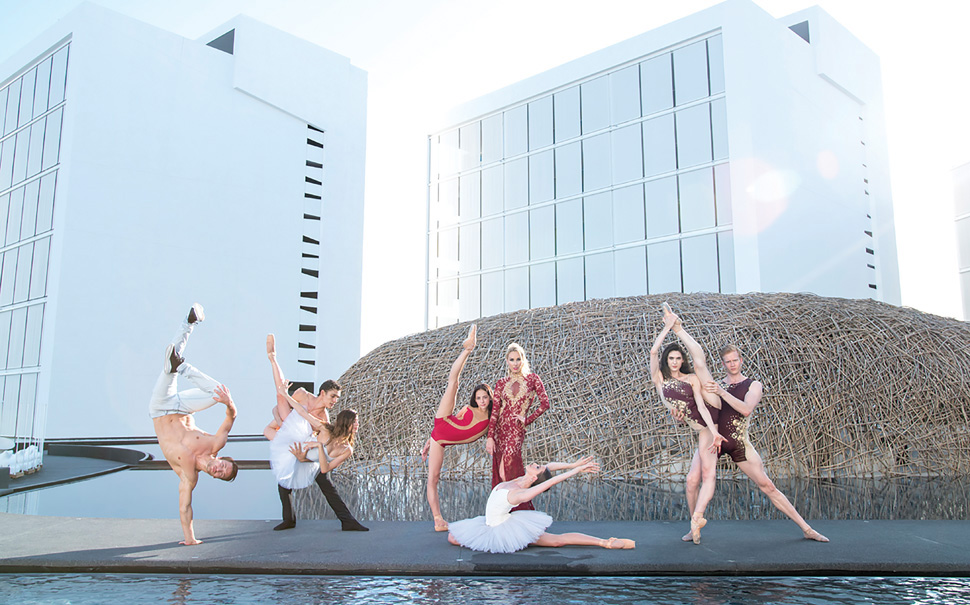 Los Cabos’ modern history starts shortly after World War II. According to local lore, the area became known to a group of California movie stars who discovered the seas surrounding the Baja Peninsula were teeming with fish. Because there were no roads, they brought their yachts or flew their private plans to this still-remote region.

It wasn’t long after that ex-U.S. air force pilot Luis Coppola built Hotel Finisterra. Spaniard Luis Bulnes quickly followed with Hotel Solmar. The transpeninsular highway was completed in 1974, and it was a game changer that connected Southern Baja to the rest of North America in a meaningful way. The international airport expanded in 1986, and Los Cabos was soon after established as the marlin capital of the world.

As the Los Cabos community has grown, so too has the arts and culture scene. The community has its own culture, one that draws on ancient history and international influences. The long-running Thursday-night Art Walk in San José del Cabo (www.artcabo.com) is one driver of the continued development of live music, artisanal crafts, theater, and dance in Los Cabos. It runs weekly November through May. The event has become an exemplary experience for locals and visitors, socially and culturally. More than a dozen galleries participate, among them standouts such as Galeria de Ida Victoria, a three-level space that houses original works from local international artists. Another is the working studio of abstract painter and sculptor Frank Arnold, whose work is in private and corporate collections worldwide.

Beyond San José del Cabo, you’ll find Pez Gordo Galeria (www.pezgor doloscabos.com) in the Shoppes at Palmilla; it represents more than 40 artists from Los Cabos, greater México, and South America. Another venue showcasing artists is at the high-end Luxury Avenue boutique shopping center (www.luxuryave nue.com) adjacent to Puerto Paraiso on the Cabo San Lucas Marina. It features the works of Yandi Monardo, who for many years searched to generate space for culture and the arts as a platform for different artists and creators involved in the spirit of the development of Baja California Sur. His search paid off. He achieved permanence and consolidation of one of the most relevant projects in the promotion of art in Los Cabos in the corridors of Luxury Avenue, where there are pieces with different techniques and whose assembly and presentation are worthy of a museum.

The longest-running showcase of local art is the East Cape Festival de Artes (www.eastcapearts.com), which is held in Los Barriles each spring. It marks its 25th anniversary in 2018, and the event will support 14 community schools with art and educational supplies. It’s a happening festival with plenty of food, music, and many local artists displaying and selling their work.

There are many traditional religious holidays throughout the year that are celebrated all over México, and that includes in Los Cabos. The holiday season here, for example, runs from the Feast of Our Lady Guadalupe on December 12 through Three Kings Day on January 6 and Candlemas Day on February 2.

Just an hour’s drive from Los Cabos is Todos Santos, an artists colony that has been named a pueblo mágico. It offers many cultural events throughout the year, beginning with the Tropic of Cancer Concert Series (www.tropicofcancerconcertseries.mx) in January. Hosted by the rock-n-roll band Cordovas, the concert series gathers local and nationally touring musical acts for two weekends of music, and art with proceeds going to the local fire department. The line-up of musicians includes La Santa Cecilia, Joan Osborne, Julie Roberts, Steve Poltz, the Jaz, and many more.

The Artists Open Studio Tour in Todos Santos is a two-day event held in February when visitors are able to see artists in their studios to learn about their respective creative processes and to purchase their art. Participating artists include painters, sculptors, photographers, muralists, air painters, jewelers, print makers, collage artists, potters, and wood turners. Proceeds benefit the Palapa Society of Todos Santos’ Children’s Art Program.

The Todos Santos Film Festival (www.filmfreeway.com) is held annually in February and features top films from México, Spain, and Latin America—all in Spanish with English subtitles. In addition, there is a film school—Escuela de Cine de Leonardo Perel—in which classes are taught and work is done on films for the Festival and to be seen at other festivals. The school’s film La Ahorcadita won best Mexican short documentary in the Mexican International Documentary Film Festival in 2013.

The Baja food and wine festival known as Gastro Vino Fiesta (www.gastrovino.mx) is held in May in Todos Santos with a three-day event featuring wine, food, and music.

Authentic handmade pottery can be found in many shops in Los Cabos such as Cobalto Pottery (www.cobaltotiles .com), which has beautiful handmade ceramic kitchenware, tiles, as well as woven handbags. Jewelry creation and design is another expression of local art and especially sought after at Indira Gems (www.jewelry designerscabo.com) in San José del Cabo. Each piece is inspired from history.

For more on the history of the region, the Museo de Historia Natural in Cabo San Lucas gives visitors an introductory course, albeit in Spanish, on the area’s native Pericú people, while showcasing fossils and archaeological finds.

Learn even more info at our sister site, www.loscabos guide.com.